When you were starting out in your career how did you know you were making the right choice as far as pursuing that career for yourself?

Uhm - I moved to Los Angeles in 1984 to establish residency & go to either UCLA or USC film school.  Nearly three years later, I was still just a full-time cashier on Rodeo Dr.  Desperate to not have retail be the apex of my professional life - I decided to take a night acting class - thinking that if I was going to (eventually) direct actors - I should understand what is it they do.  I was always dreadfully shy & had ZERO desire to perform but (though it TERRIFIED me) I enjoyed acting far more than I anticipated.  I thought it might be the easiest way to break into the film industry & then learn a trade (like directing) by being on sets.  It seemed to me that talentless actors succeeded all the time & I saw no reason I could not join their ranks.  I was 22 or 23 but looked a very convincing 15-years-old so I began working as an actress almost immediately (and played high school age forever).  So - I had very little reason to question my choices.

When it got harder - in my 40's - I really tried to think of anything else I could actually DO (without any experience or any degree) that would not leave me broke, broken & despondent and nothing else appeared.  So - I am still fighting the fight.  And I do every side hustle that raises its head.  I have painted gyms, worked in post production in reality TV, written a novel, worked in a photo lab, had an Ebay retail empire for several years, shot actors headshots & photographed real estate, started a cooking blog & then a Youtube cooking show & I sold almost everything I have of value.  I have struggled terribly - and I still know I made the right choice.

Who were you biggest influences growing up?

My mother. And my stepfather.  Both are smart, funny, creative, kind & generous.  And the music & style of the broader punk rock/new wave/alternative scenes in Boston & elsewhere in the late 70's & early 80's.

When you faced obstacles or fears along the way how did you overcome them, and move beyond them?

I am not sure how to answer this beyond what I have said above.  I have always had a very well-formed sense of self.  I am generally confident & have proven myself to be very strong.  So - I just do what is in front of me that has to be done.  Work behind a counter for $10 an hour for a year in your mid-thirties?  OK.  Sell the most precious thing I own?  OK - if I have to. Auditions are the scariest thing on Earth for me but I have to endure them to get what I want - which is work as an actress - so I do it.  Just put your fucking back to it & push.

What or who inspires you and why?

Talent in all forms - I find inspiring & seeing someone do what they do incredibly well - moves me to tears.  Like Katelyn Ohashi.  WTF with her?  I cry every time I see her tumbling runs.  Selflessness is also inspiring.  Marc Ching - who goes to China etc to rescue dogs from the meat trade.  My friend, Nikki Carvey of Road Dogs & Rescue is a huge inspiration for me.  I have known her 10 years & have adopted 5 dogs through her & fostered at least 15 more for her.  Fostering is hard in that I I cry every time one of my fosters gets adopted but those are tears better shed because a deserving dog found a wonderful forever home than shed because nobody stepped up & the dog died in a shelter.  I am frustrated to the point of nearly being offended when people say (and MANY do) - "I could never foster. I would want to keep them all."

Well, no shit.  EVERY foster wants to keep them all.  There is no achievement or saint status awarded to you when you declare you cannot help.  Like when I post a foster who needs a home & dozens of people comment explaining why they cannot help.  "I would but..."  No gold stars for expressing that you wish you could help.  HELPING is what earns you good karma.  Actually DOING SOMETHING is what matters - not the declaration that you are too soft-hearted to save lives.

I realize not everyone is in a position to help. For reasons too numerous to list. But those who really could help if they truly wanted to but think saying “I wish I could but I love animals too much to put myself out emotionally” is the same thing as actually helping - they make me kinda crazy. And that attitude completely dismisses the emotional gutting those in rescue volunteer to endure for the good of the animal.

And Nikki (Road Dogs founder) has grown from a one-woman operation saving mostly mangy English Bulldogs to a massive network doing mainly senior & medical rescues.  She saves - like - the 15-year-old chi-mix dumped at the pound or the cleft palate or hydrocephalic pups that breeders want to euthanize.  Or overbred bulldogs covered in mammary tumors from neglect & abuse.  Many of these dogs don't make it & the trauma & loss Nikki absorbs in her efforts to save them all is profound.  THAT is inspiring.  Doing what is best for a helpless innocent - even in the face of the great chance you will suffer heartbreak - heartbreak over & over & over - just for trying.  I admire that enormously.  That MATTERS.  Looking & feeling sad does not matter.  Or help anyone.

There are a few short-term boyfriends I would erase from my resume but nobody significant.  I am not one to regret much.  Seems like a waste of energy to me.

What do you feel is your greatest achievement?

In the broad sense - moving to LA alone & knowing NOBODY at the age of 19 with $3000 (that I saved by working two $3-per-hour jobs after school hours) and managing to succeed.  Alone.  After crying every day for most of a year from fear & homesickness.  I managed to pull off a life that is fairly successful by most standards.  Without a degree or connections or a mentor or even the faintest idea of how to get what I wanted.  I think I am the first person in my entire family to buy a house.  So - I am proud of my drive, stamina & gumption.  Gumption matters.

Narrowly - I am most proud of my novel - Bathing & the Single Girl.  http://bathingbook.com - I have always collected books & admired writers more than any other creative field.  Writing my novel was an ENTIRELY solo effort.  I did not even have an editor.  I wrote the first draft in 8 weeks.  The rewrite took about another 8 weeks.  It is entirely my personal piece of art.  If you love it - I get all the credit.  No collaborators to share credit with.  And - if you hate it - I get all that blame.  I like it that way.

What are the most important lessons you have learned along the way?

Be nice. Be kind. ESPECIALLY to people in less powerful positions than you.

Follow through on impulses to be generous.  Don't second guess them.

And - have nothing in your home that you do not think to be beautiful or know to be useful.

Smiling at people you make eye-contact with often brightens even the grumpiest face staring back at you. And that elevated energy comes back at you.  It is a fun game to play for me when I feel down.

What do you hope others will remember most about you and your life?

Kindness, authenticity & intelligence.  These are the things I value most in others so I hope these are things I am known for.

What is the best advice you would give other women who are not sure what path to choose in their life?

Try for the thing you REALLY want to do first.  Shoot as high as possible.  And be prepared for it to be really, really fucking hard - and hard for a really fucking long time.  Or become hard again after it got easy for a while.  If the being hard part scares you off - you did not want it badly enough.  Choose something else. For acting specifically - I say do it ONLY if there is NOTHING else that might make you happy.  It is a grueling life for the vast majority that pursue it.

What does success mean to you?

Financial security.  TRUE financial security that was derived from pursuing your heart's desire.  And the admiration, respect & love of the people you admire yourself - personally (great friends) and professionally (peers).

And lots and lots of dogs.

I hope you enjoyed this interview with Christine as much as I did. She is one Fearless, Fierce, Fabulous Female who is unafraid to work hard, change course when needed and reinvent herself. She has taken her creativity and used to do so many amazing things. She is also such a great reminder to all of us that there is nothing we can’t achieve if we put in the hard work and Hustle for the things we want in life. And above all else, a great reminder to never give up on the things you want in life! 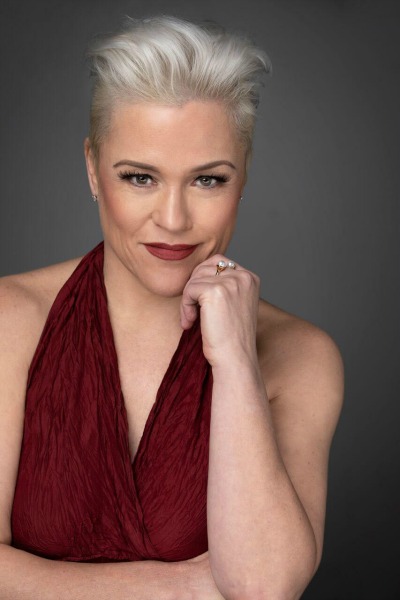